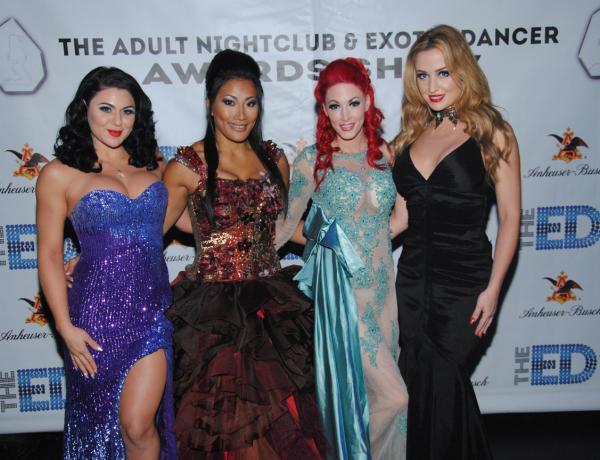 Roxi D’Lite, Tootsie’s Cabaret and Spearmint Rhino win big in New Orleans at the 18th Annual ED Awards Show Hosted by comedian Thea Vidal at the Civic Theatre in New Orleans on August 25th, the “ED’s” are the only national awards show for the multi-billion-dollar adult nightclub industry

In one of America’s most historic cities, on the biggest stage in the industry and in front of a capacity crowd, the best of the adult nightclub industry were honored at the 18th Annual ED’s Adult Nightclub and Exotic Dancer Awards Show.  As the glitter settled, famed “bad girl of burlesque” Roxi D’Lite danced away as ED’s Overall Entertainer of the Year, Tootsie’s Cabaret in Miami Gardens was awarded Overall Gentlemen’s Club of the Year, and Spearmint Rhino was bestowed with the coveted Club Chain of the Year. This year’s show was held at the Civic Theater in downtown New Orleans on August 25th and hosted by Thea Vidale.  Best known for her primetime ABC show “Thea,” as well as “Last Comic Standing” Vidale is a 30-year comedy veteran whose show can be as clean or as dirty as the audience calls for—and the crowd loved every minute of her raunchy repertoire.

The ED’s Awards Show is presented and produced by ED (EXOTIC DANCER) Publications each year during the Annual Gentlemen’s Club EXPO, also presented and produced by ED Publications. For the first time in its 23-year history, the Annual Gentlemen’s Club EXPO was held in the “Big Easy,” New Orleans, at the Hilton New Orleans Riverside Hotel, August 23-26 (Las Vegas had been the previous host city for the EXPO). The Annual EXPO is the only national business-to-business convention for the multi-billion dollar adult nightclub industry, and the four-day event features: a full slate of seminars, workshops and panel sessions; a Tradeshow showcasing companies with products and services available to club owners and operators; nightly parties including this year’s Opening Night Bourbon Street Pub Crawl; networking events; and much more.

The ED Awards Show is the “highlight” event of the EXPO, and this year was no exception. At the Civic Theatre, 13 awards were presented, including Club of the Year and “Small” Club of the Year in four regions (East, South, Midwest and West), along with the aforementioned Club Chain of the Year and Overall Entertainer of the Year. In addition, the Newcomer Entertainer of the Year Award was presented to British alt-model and feature entertainer Angel Beau, while Bryant Emiliani of Penthouse Club in Baton Rouge, Louisiana was awarded the General Manager of the Year Award. Joe Carouba, chairman of the BSC Group of San Francisco (owners of the San Francisco Penthouse Club, Hustler Club, and Gold Clubs respectively, among several others), was inducted into the EXOTIC DANCER Hall of Fame. [A complete list of ED’s 2015 Award Winners is attached.]

“I am so very thankful to have been bestowed this prestigious award from my peers and employers”, says Roxi D’Lite.  “When I first started dancing, not only was I unaware I had talent and passion for performance, but I also didn’t know there was such an incredible community of extremely supportive individuals. I’ve made it my mission to bridge the gap between burlesque and the adult nightclub industry. So finally, because of this award, I finally feel my mission is coming to fruition; I’ve come full circle. Words can’t express how much this means to me.”

Voting for the 2015 ED’s Awards was held online only at TheEDawards.com in July 2015. Club, entertainer, and staff nominees were gathered mainly from pre-nomination votes placed at www.theEDawards.com throughout the month of May.

“For our first time hosting the EXPO and Awards Show in New Orleans, we couldn’t be any happier with the unbelievable turnout and enthusiasm of the sold-out crowd at the Civic Theatre,” says ED Publications’ Associate Publisher, Dave Manack. “Thea killed it—the crowd loved her! And our four Entertainer of the Year nominees each showcased exactly why they deserved to be up on that  prestigious ED Awards Show stage.”

Are you a European Stripclub owner? Together with ED publications, Strip-magazine.com is planning an European Version of the ED awards and Club Expo. We want to get in contact with you, e mail us at: info@strip-magazine.com to get more information.

Overall Gentlemen’s Club of the Year

Club of the Year East

Small Club of the Year East

Club of the Year South

Small Club of the Year South

Club of the Year Central

Small Club of the Year Central

Club of the Year West

Small Club of the Year West

“Feature Club” of the Year

Club Chain of the Year

International Club of the Year

General Manager of the Year

Club Employee of the Year

DJ of the Year

Overall Feature Entertainer of the Year

Newcomer Entertainer of the Year

Club Favorite Entertainer of the Year

Adult Movie Entertainer of the Year

Miss Exoticdancer.com of the Year