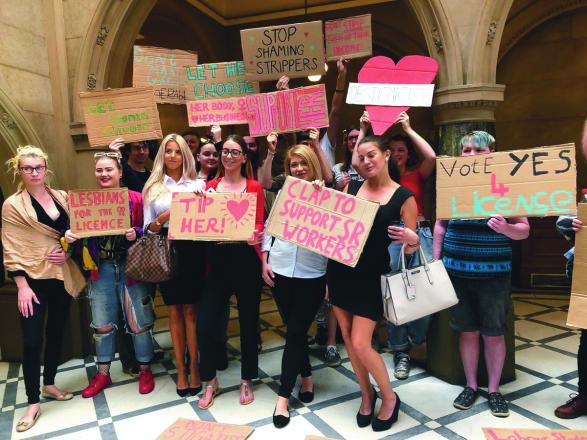 Blackpool Licensing committee has reviewed a series of complaints from lap dance customers and so put in place new rules on payments being made within gentleman’s clubs to try and establish a unarguable position that the customer knows how much and what they are paying for. Card Payments must now be in a fixed location clearly visible on CCTV with managers overseeing payments above £100 with price list prominently displayed within the club

Lap dance club Purple Door on Dock St in the UK’s northern city of Hull is proactively hiring dancers, reaching out via Facebook asking for a private message from any interested workers, boasting the fact that most girls stay 5 or 6 years in a recent interview.

Bing’s Gentleman’s Club West Bromwich in the midlands has been dealt a deadly blow after three of its door men have been charged with suspended jail terms by Wolverhampton court due to a incident which sparked after a customer groped a dancer, the jury decided the bouncers “went over the top” in what became a “unlawful fight” akin to a “mass brawl” leading to the customer being hit over the head with the base of bar stool, another customer had a chipped tooth, a cut hand plus suffered a wound to the head. The judge gave all three men a 12 month sentence suspended for 18 months with the warning that most people charged with violence go straight to prison.

Spearmint Rhino workers in Sheffield campaign to stay open, despite increased rules the club is still being challenged heavily to renew its licence. The girls that work there are publicly fighting back to make clear the negative image portrayed of the industry is far from reality.  The most recent challenge came after a video was secretly made by two ex-police officers to “expose the truth” of what happens at the club which led to the threat that they would be forced closed after 16 years of trading from the Brown st location. The girls with a wide range of ages from 19 to 38 make clear that the club provides a steady income, in a safe environment which allows them to provide for themselves and their children. The groups petitioning against the club are accused of giving a one sided view that’s unfair to the licensing committee with the argument made by the girls that if the club closed the alternatives would spring up in the city behind closed doors, unlicensed without rules or regulations creating an unsafe working environment.

In Acocks green near Birmingham proposal for a new lap dance club in what was Zorbas Greek restaurant was refused due to 1,200 people objecting on the grounds that it didn’t fit with the local area, the club nearby well known child care & kids play centre. The applicant “pure gold” was denied the alcohol licence with opening times till 4am or 6am depending on the night of the week, so could not utilise the venue as a strip club or alternatively as a nightclub.

Protecting other strippers and why it matters