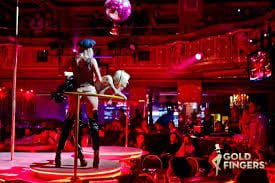 Prague Strip clubs came after all of the countries liberated by the collapse of Communism in 1989. The Czech Republic has been the one that has made the most rapid advance to a free market economy and Western European prosperity levels. Actually before WW2 Czechoslovakia had been one of Europe’s more prosperous countries and Prague a major capital so in some ways it’s just returning to it’s rightful position in the economic pecking order. The country joined the EU in 2004 and although it’s GDP per head is still only a third of that of the original countries the gap is narrowing quite rapidly. Prague itself has a population of 1.2 million and is a beautiful and historic city which was lucky enough to both miss mass destruction in WW2 and the commercial redevelopment of dreadful ugly buildings in the 60s and 70s.The result is that Prague has seen a massive boom in tourism from virtually nil in 1990 to over 8 million in 2005. As well as the sights to see this has been also fuelled by cheap air flights from the likes of Easyjet and Ryanair making the city a popular destination for weekends away and stag and hen parties. This has had some good effects { many new top class hotels have opened, the airport has been modernised etc} but some drawbacks { prices have shot up and crime has become more prevalent}. Compared to most major European or US cities Prague remains quite safe with little violence however a visitor needs to be very aware of pickpockets, cheating cab drivers, and nightclub touts! Here you can read the Shocking history of Striptease

Another effect of this visitor boom has been the creation of a large adult industry catering both for tourists and newly enriched locals. Under communism nudity was banned but in the last 10 years a large number of strip clubs, brothels, saunas etc have opened and Prague now is one of the main centres in Europe. Compared to the US, UK, or France the climate is very liberal in the Czech Republic and so several of the “strip clubs” are basically brothels with floorshows { normally with 10 or more private rooms} and several normal disco type places also feature topless dancers. Currently all the clubs are locally owned though Spearmint Rhino did open a club there in 2004 but despite it also having a casino and being very plush it was not a success and closed down after a few months.

As a visitor you should be aware that like everywhere else in the world the smart city centre places are more expensive than those out of town and that drinks are a lot cheaper in normal bars rather than clubs. There must be 30 or 40 clubs of various description in Prague which feature naked or semi naked women { not to mention several that feature naked men} on stage but here is a 2 of the better known venues.
Goldfingers
5-7 Wenceslas Square
Prague 1

This probably the best known of all in Prague Strip Clubs, it’s in the basement of the 5* Ambassador Hotel on the square itself. It’s really an old style strip club with full show involving 15 to 30 girls. Program is non-stop all night long!!. The girls are very good looking and the shows well put together, it’s one of the very best pure strip clubs in Europe. Drinks are expensive by Prague standards but it’s well worth a visit. The public shows are strictly non contact but private dances can involve touching though normally they are very expensive at around 60Eu. The entrance is for free and its open: SU to THU – 9PM TO 5PM, FRI + SAT – 9PM TO 6PM www.goldfingers.cz To get adress and contact info for this Goldfingers in in Prague Strip Clubs, go to this page: https://stripclubguide.com/place/goldfingers-prague/
Darling Cabaret
32 Ve Smekach,
Prague 1
www.kabaret.cz

This is just off Wenceslas Square and is also a rather expensive upmarket venue, very large { 3 bars and 3 stages}rather more like a US TD club. It offers limo collection from most of the central hotels and has a VIP section,very pricey drinks, and a strict dress code. The club has lots of girls on and a continuous stage show but the hustle here is much more obvious and most of the girls offer “ extras” beyond anything you can get at Goldfingers. Acts include lesbian shows, toys , and even a midget ! Probably overall the most expensive place in town, for those with deep pockets.

To get adress and contact info for Darling Cabaret in Prague Strip Clubs, go to this page: https://stripclubguide.com/place/darling-cabaret/