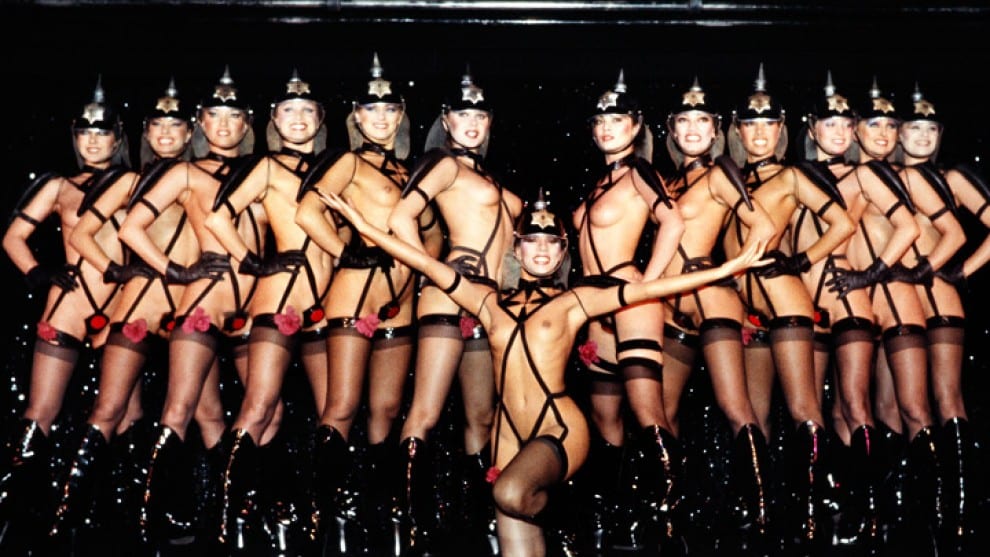 The Crazy Horse Paris is probably the longest running and most famous strip club in the world. I thought it was time that strip-magazine readers were given a brief history of this venue and how it has changed over the years.The man behind the club was Alain Bernardin  had a very varied background but had finished up running a successful restaurant , his wife had died of cancer and he took up with a singer called Julianne and he initially started the club in an old wine cellar on the Avenue George V to promote her career. The venue was called the “Crazy Horse Cabaret” named after the American Indian Chief and when it started it featured a doorman dressing as a Canadian Mountie on a horse.

The initial review was not a long term success and after closing for a period it reopened in 1953 this time featuring a topless dancer called Miss Fortunia. Bernardin had seen a US film called Midnight Frolics about the Burlesque scene over there and he felt there was a gap in the market as while 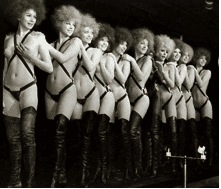 no nudity.  The show still featured conventional entertainers like magicians and singers and in fact Charles Aznavour got his first break here. The show though was mainly known for it’s semi nude dancers and Bernardin managed to combine his 2 passions, art and women, in the package.

The dancers recruited were all classically trained and had to be between 5ft 5 and 5ft 8 tall with no surgery, tattoos, or tan lines. The physical similarity of the dancers was exploited using wigs and make up to make the line up all look very similar for some of the numbers produced. The rules were strict with no contact with the customers allowed, no drink or drugs and weekly weigh-ins to make sure the girls looked the same as when recruited. The club has always used 12 dancers at once using an active pool of 24 at any time. 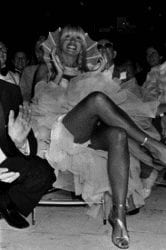 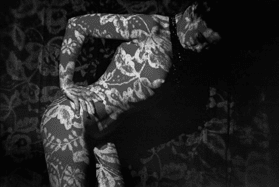 exotic concoctions like Lily la Pudeur and Diamant Baby} in light on the curtains before they came on. In 1960 by mistake he projected onto one of the girls bodies and from that moment on the use of light on naked flesh has been one of the features of the show. The show now attracted the likes of Salvador Dali as regulars and President’s Kennedy and Pompidou both attended shows. The show was featured in the Woody Allen feature film “What’s new pussycat” in 1965 and it became as much a part of the Paris scene as the venerable Moulin Rouge .

In response to the swinging 60s liberalisation full nude dances were introduced in 1971 and all of this heralded a golden era for the club. As with the girls Bernardin was a perfectionist regarding costumes and produced posters that have become collectors items. In 1972 a girl was spotted dancing in a nightclub and invited to audition, she became Lova More and became a feature dancer at the club and also made records, eventually in 1985 she married Bernadin. 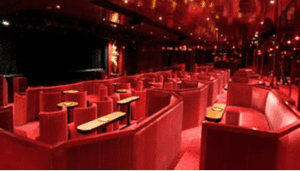 The Crazy Horse Paris itself was looking rather cramped so in 1989 Bernardin expanded and remodelled the place at the same time renaming it a Theatre as opposed to Cabaret . The new look theatre seats 350 with a further 20 allowed standing in the bar and has 2 shows nightly starting at 8.15 and 10.45. It now covers no less than 12 cellars. In the same year Jean Paul Gaultier brought Madonna to the show and she spent several days looking at the routines in preparation for her famous “Blond Ambition” world tour Crazy Horse Paris 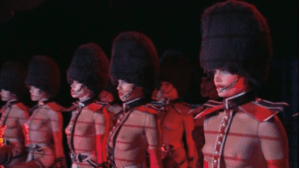 guards left} a routine which has opened the show ever since.

Despite all this apparent success Bernardin in 1994 { now 78} shot himself in the office of club leaving no suicide note.  The Crazy Horse Paris was inherited by his 3 children Sophie, Didier, and Pascal who basically kept it as their father had run it though they did open outposts in the  5,780 bedroom MGM Grand in Las Vegas { a success} and another in Singapore {a flop}. The club remained on most tourist itineries but gradually lost the reputation for innovation that it had once had.

The Vegas shows were initially operated out of Paris but in more recent times they have recruited girls locally and the 2 venues now have a total pool of 50 dancers. The theatre only seats 340 {tiny by Vegas standards !} so is almost identical to the Paris original and it has prospered despite the presence of more than 1 unconnected  lap dancing club with the same name operating in the city.

In 2005 they sold the business to a group of investors led by Philippe Lhomme who installed Andree Deissenberg to run the show. He spent over £2m renovating the place and made a number of innovations to bring it back into prominence. Notable amongst the changes has been the use of guest stars both in Paris and Vegas like Pamela Anderson and Carmen Electra starting with striptease superstar Dita von Teese  in 2006.

Although there has been no more permanent venues overseas in 2011 the club ran touring shows that appeared in places like London and Brussels for several weeks at a time. The group also promotes the dancers and routines it has for commercial promotion, exhibitions , parties etc. In 2011 the club was subject to a documentary film celebrating it’s 60 years by award winning director Frederick Wiseman .

To get adress and contact info for the Crazy Horse in Paris, go to this page: https://stripclubguide.com/place/crazy-horse/

The Shocking History of striptease