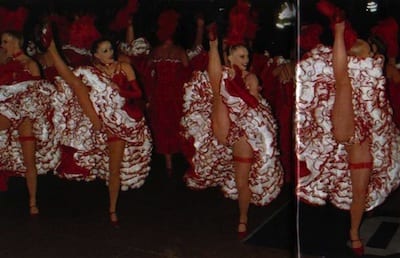 The Shocking History of striptease

either partly or completely, in a seductive and sexually suggestive manner. The person who performs a striptease is commonly known as a “stripper” or exotic dancer. Striptease involves a slow, sensuous undressing, with the audience urging the stripper to remove more clothing. The stripper may prolong the undressing with delaying tactics such as the wearing of additional clothes or putting clothes or hands in front of just undressed body parts such as the breasts or genitalia. The emphasis is on the act of undressing along with sexually suggestive movements  The Stripper,” dances to the bumps and grinds to three essential musical elements: squealing horns, taut snare drum breaks and loud, grand flourishes.- (Wikipedia)

Make a lotta noise! (Come on)
Lets get naughty! (Hey hey hey!)
Take it off, Take it, take it all off

The first recorded striptease dates back to a myth from ancient Sumerian times involving Inanna, the Goddess of Love, and her descent into the underworld to find her lover Damouz. At each of the seven gates, she removed an article of clothing or a piece of jewelery. As long as Inanna remained in hell, the earth was barren. When she returned, the earth again became abundant and fruitful.

Salome’s ‘Dance of the Seven Veils’ – is believed to be the dance that Salome performed for her stepfather, Herod, as described in the Bible in Matthew 14:6-11 and Mark 6:21-28.where the daughter of Herodotus danced for her stepfather, Herod, on his birthday. As a reward he promised her anything she wanted and, prompted by her mother, she chose the head of Saint John the Baptist, which she then carried to Herodotus on a silver platter..Here you can read An exclusive interview with a million dollar stripper

The dance is not named, and this name first appeared in print in the stage notes to Oscar Wilde’s 1891 play Salome. It is not a traditional Middle Eastern dance, but more probably a Western invention steeped in Orientalist misconceptions, although some believe it to have associations to ancient Eastern religions. In the modern Western world, the dance is often associated with striptease, although some belly dancers perform more artistic interpretations. But belly dancing was also popular in operas, such as Richard Strauss’s 1905 Salome, and in highfalutin dance performances,..

The first striptease act in this era was on the English stage and was performed by a man. It occurred in the popular play ‘The Rover’ (1677) in an amorous scene where a English country gentleman undresses and goes to his bed in his shirt, and drawers.

StripTease, in the literal sense of both ‘strip’ and ‘tease’ was a regular part of entertainment provided in London brothels in the eighteenth century. The women called ‘Posture Girls’ stripped stark naked and they climbed on to tables.

Two women dancers in the early 1900’s , one from the States and the other from Canada, who exposed more of their bodies than had hitherto been customary. Isadora Duncan’s costume was a flowing  tunic that left bare her Venus sphere. But Maud Allen danced barefoot in a loose Greek gown (a wisp of chiffon) designed by herself; and the dance portraying Salome she all but naked.

In 1890s Paris in which a woman slowly removed her clothes in a vain search for a flea crawling on her body was featured as an act of striptease.. At this time Parisian shows such as the Moulin Rouge and Folies Bergèrepioneered semi-nude dancing and tableaux vivants.

“Nineteenth-century Paris comes vibrantly alive in Jean Renoir’s exhilarating tale of the opening of the world-renowned Moulin Rouge. Jean Gabin plays the wily impresario Danglard, who makes the cancan all the rage while juggling the love of two beautiful women—an Egyptian belly-dancer and a naive working girl turned cancan star. This celebration of life, art and the City of Light  is a Technicolor tour de force by a master of modern cinema.’ http://www.criterion.com

There are a dozen or more popular legends as to how the strip was born – telling how a dancer’s shoulder strap broke, or some similar nonsense. In fact, it had been around since Little Egypt introduced the “hootchie-kooch” at the 1893 Chicago World’s Fair – The hoochie coochie was performed inside the fair’s Algerian Village— who wowed millions of fairgoers on the Midway,    Mata Hari. the most celebrated segment of her stage act was the progressive shedding of her clothing until she wore just a jeweled bra and some ornaments over her arms and head.

(There’s a place in France where the naked ladies dance, but

they learned to take it off in Chicago. –Ted C. Fishman )

The strippers soon dominated burlesque, and their routines became increasingly graphic. To avoid total nudity but still give the audience what it wanted, the ladies covered their groins with flimsy G-strings and used “pasties” to cover their nipples. This was usually enough to keep the cops at bay, even though pasties were far more vulgar that a plain naked breast.

Strippers had to walk a fine line between titillation and propriety – going too far (let alone “all the way”) could land them in jail for corrupting public morals. Some gave stripping an artistic twist and graduated to general stardom, including fan dancer Sally Rand  In the 1920s-30s mesmerized her audiences with her famous bubble dance and fan dances. the tease? The illusion of nudity.       Gypsy Rose Lee  was best known for her sense of humor making her audience laugh as she peeled off her clothing. The tease?  “If a thing is worth doing, it is worth doing slowly . . .very slowly”– In the 1930s the famous Josephine Baker danced semi-nude in the danse sauvage at the Follies..      Rita Hayworth begins her striptease in Gilda – her erotic dance routine was “the most demanding of her entire career”.

And in 1990 male strippers were in the vogue performing to female audience.  Male strippers for female audiences now has a very high-profile, thanks in part to acts like the Chippendales and the film “The Full Monty” which has now entered common parlance as a description of a full strip.

In the 80s and 90s a number of  Gentlemen’s Clubs and Strip Clubs arose and became very popular for men wishing to enjoy female strippers, where the individual strippers perform both ‘pole dances’ and private strips (lap dances) for their clients. 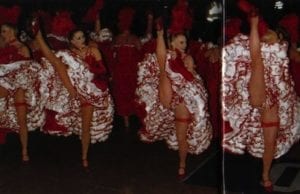 From the 1880s onwards, burlesque comedy was built around settings and situations familiar to lower and working class audiences. Courtrooms, street corners and petty criminals were favorites, as were examining rooms ruled over by quack physicians. Sexual innuendo was always present, but the focus was on making fun of sex and what people were to do in the pursuit of it.

(Injured Man crosses stage in assorted bandages and casts.)
Comic: What happened to you?
Injured Man: I was living the life of Riley.
Comic: And?
Injured Man: Riley came home!  http://www.musicals101.com

Despite the fact that the Internet is awash in sex and pornography, burlesque  and striptease have made a surprising comeback in recent years. While the “golden age of burlesque” is long gone, its legacy is very much alive.  The tawdrier burlesque tradition lives on too. All of these entertainments have their righteous critics, and all appeal to a nation-wide audience.

Here you can learn about Stripper Jobs