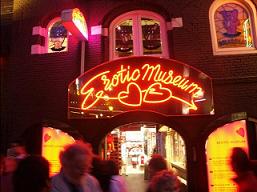 There are actually less live strip shows than it first appears as several places which look like shows turn out to be ticket only outlets. There are however enough to be going on with both in the red light district itself and nearby to keep the most discerning customer happy

There is also a variety of formats though as yet nobody has tried anything like the US/UK style of table dancing clubs, compared to Anglo Saxon countries here there are few rules about what can be shown on stage or on touching. Although like all cities it has crime Amsterdam is not a particularly dangerous place {watch for pickpockets though} and the clubs mentioned below are not rip offs though they can be expensive.

The red light district is close to the central railway station and quite picturesquely situated on canals, in the evenings it’s always busy with a large number of curious tourists making up most of the crowd. The main places are,Casa Rosso, Oudezidjds Achterburgwal 106,

This is a theatre style venue which seats 200 and is slap in the centre of the red light district and probably the most famous place in town. It’s often filled with tourists {typically with a substantial minority of women} and provides full sex show with boy/girl shows and various object penetration acts plus the occasional male stripper. It’s 30 Euro to enter {45 Euro with 2 drinks} and the full show takes about 1 hour and then repeats through the evening, until it closes at about 2am. There is some audience participation but the emphasis is on the show and a revolving stage means that everybody gets a decent view.

In the main the performers are good looking and it’s a reasonably slick show but the theatre format makes it less of an addictive experience in my view than some of the other places. It is however well worth a visit once particularly if you come from a country where such shows are outlawed.

The Moulin Rouge {nothing whatsoever to do with the place in Paris !} is also in the middle of the main red light area and it’s a similar live sex show to the Casa Rossa though rather smaller and on less tourist itineries. It’s open from 2pm to 3am and has a continuous show which repeats every hour or so. It’s 25 Euro to enter and this includes 2 free drinks. As it’s smaller, cheaper, and less famous than Casa Rosso some find it more friendly.

The Banana Bar is owned by the same people as the Casa Rosso and is just as famous but it runs to a rather different format. It’s basically a bar on 2 levels, there is no stage as such the action taking place on the bar itself It’s open from 10pm to 2am during the week and until 3am at weekends. It’s a hefty 40 Euros to enter but that entitles you to free drinks provided by the scantily clad girls, the entrance fee only allows you 1 hour in the place and they enforce this quite strictly.

The girls will just serve drinks until somebody pays a either a further 20 Euro for a single girl or 50 Euro for a full show which involves penetration using a number of items including the famous banana! A friend you visited here once said “there is a sign saying a banana has 41 or something uses but as far as I could see it had only 1 here !” . The show is very “in your face” and as elsewhere in Amsterdam there are no rules about no touching.

This one is a bit more difficult to find still in the red light area but in a very narrow alleyway. You should aim for the Bulldog coffeeshop on Oudezijds Vorburgwal and look out for a tiny alley called Trometterdrsteeg, Bethlehemsteeg is a continuation of this alley after the first junction. This is more of a normal strip bar with topless barmaids and regular stage shows. The stage shows can be a bit unenthusiastic and the girls make their money from private lap dances which are 10 Euro a time. These are short but full on. Entrance to the bar is only 5Euro, it’s open from 7pm to 2am weekdays and 3pm to 2am Friday and Saturday.

This is outside the main red light area on a continuation of the Rembrandspein which is one of the main restaurant areas about 10 minutes walk away. It’s a conventional bar open from 10pm to 4am which has free entrance. Drink is 6 Euro for a small beer but that entitles you to watch the stage show which is normally excellent involving 2 poles. Private dances are 50 Euro each, I’d recommend this place if you don’t want to stay purely in the red light area , the girls are good looking and the stage shows well up to standard.

This is a similar strip bar to the Blue Bell, close buy but not so highly regarded. It’s free to enter and operates on a similar basis.

Male strippers; the myths and the facts.