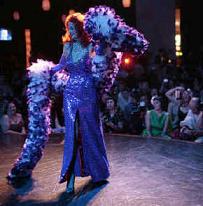 LAS VEGAS Tempest Storm is fuming and her fingers tremble with
frustration. Theyre aged, knotted by arthritis and speckled with purple
spots under paper skin.But the manicure of orange polish is flawless and new, and matches her
signature tousled mane.

She brushes orange curls out of her face as she explains how shes been
slighted.

Shes the headliner. Shes a star and shes classy.

“I dont just get up there and rip my clothes off,” she says.

More than 50 years ago she was dubbed the “Girl with the Fabulous Front”
and told by famous men she had the “Best Two Props in Hollywood.”

Since then, Storm saw the art that made her famous on the brink of
extinction. Her contemporaries – Blaze Starr, Bettie Page, Lili St. Cyr –
have died or hung up their pasties.

Her act is a time capsule.

She knows nothing of poles. She would never put her derriere in some mans
face. Her prop of choice is a boa, perhaps the occasional divan.

It takes four musical numbers, she says adamantly, to get it all off and to
do it classy.

But the producers of tonights show, just kids, they want her to go faster.
She gets just seven minutes.

“I did seven minutes when I started,” she says.

They gave her trouble last year, too.

They even cut her music before she finished.

There may not be a next time for this show, she says. The threat lasts just
minutes.

“No, no. Im not ready to hang up my G-string, yet. Ive got too many fans
that would be disappointed.”

Stardom and fandom feature prominently in Tempest Storms life – and in her
neat, two-bedroom Las Vegas apartment.
Visitors are greeted by photos of a young Elvis, her favourite rock n
roller and, she says, a former lover.

He met her after her show in Las Vegas and fiddled with her skirt as he
introduced himself. The relationship ended about a year later because
Elvis manager didnt approve of him dating a stripper, she says.

But she couldnt change who she was.

Stripping already had made her famous.

She dated some, just danced for others.

The evidence is framed and displayed on tables and the living room wall.

As a young woman, she was working as a cocktail waitress but wanted to be a
showgirl. First, she needed her teeth fixed.

“Do you think my bust is too big for this business?” she asked at her
audition.

She made it into the chorus line, was told not to gain a pound and to get a
dentist.

The trick is having a warm presence, an inviting smile, she says.

When she takes the stage, she lets her mind float back to “Georgie.” She
imagines herself as a little girl, in her best dress, running down the road
to meet her daddy coming home from work.

On Sundays, Storm tunes in to a televangelist who tells her anyone can
overcome odds.

Its the only religion shes ever taken to.

She believes this is the lesson of her life. Be a survivor. Never stop
doing what you love, it makes you who you are.

“If you want to get old, youll get old,” she says.

There have been men who disappointed her, financial strain, brain surgery.

After it all, she sits on her couch and exercises in front of the
television on a small stationary bike.

She doesnt smoke or drink or eat much.

“Im just blessed, I think. And I know when to push myself away from the
table.”

Staring up at the 80-year-old woman in fishnets, a sheer rhinestone bra and
a G-string, a young woman at a recent show turns to a young man and
declares:

“I want to look like that when Im her age.”

Be A Better Stripper !