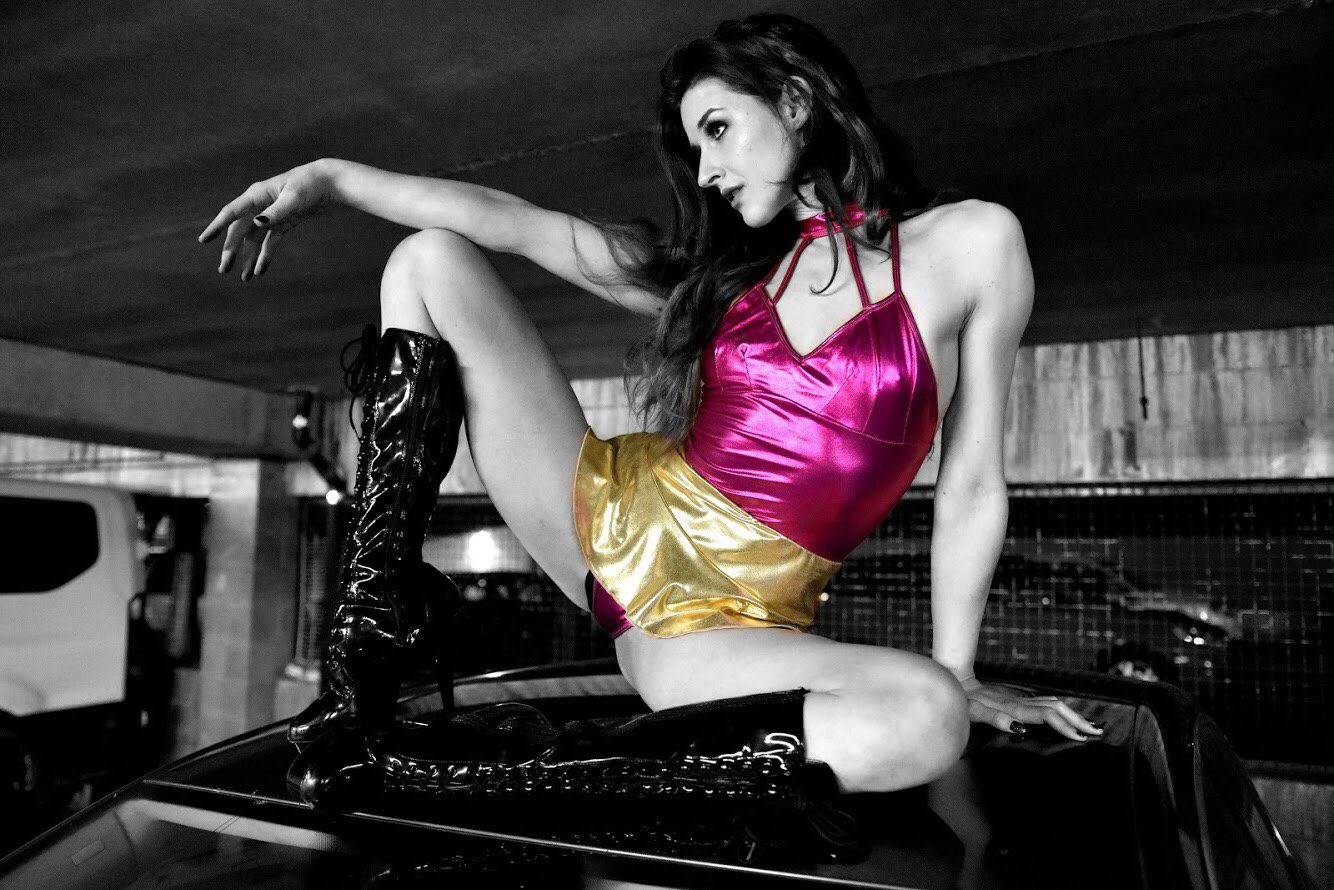 By day, it’s hot-buttered toast and soft slippers. In the cool of the night, these sexy shape-shifters emerge. Under stars, under neon lights, stripper superheroes are owning their superpowers.

Unveiling here, for all the world to see, this mysterious fragrance-of-the-night reveals to us something of the art and heart that make our beloved strippers: Superheroes!

I started learning aerial silks in 2013. I’d met some friends who were into circus, and they signed me up. I’ve always been physically inclined and fell in love with the art form immediately, even though I could not do anything for the first three months due to having no arm strength whatsoever. I practiced silks casually for the first few years, then upped my training a year ago. 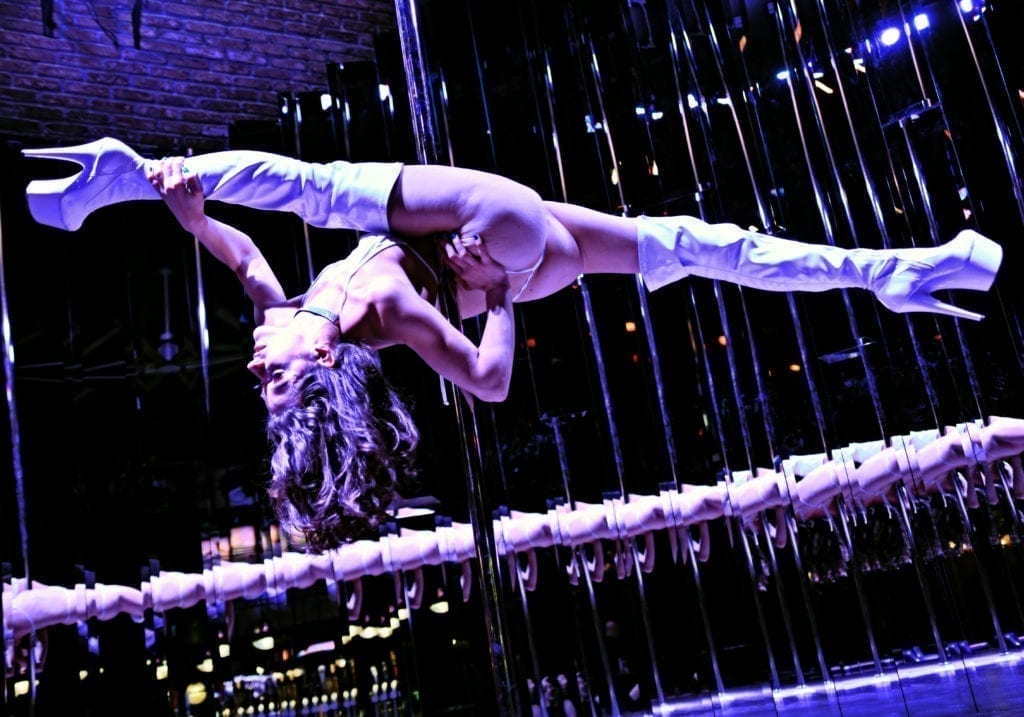 Nina Nightblossom performs the upside-down splits on the pole at the Granville Strip in Vancouver.

The dancers I work alongside are so amazing. I am inspired to train hard.

Pole, I started learning a little over a year ago. I installed a pole in my apartment and would learn from the internet or occasional classes, but mostly it was a fun party piece. I started studying more and training seriously about nine months ago after getting hired as a stage dancer at the Granville Strip.

Stripping makes me feel like a superhero! I love the aesthetic. Superheroes inspire me in art because strippers are just like superheroes, flying around doing superhuman stunts in cool costumes.

My favorite superhero is the stripperliest of all: Sailor Moon. I can relate to her. She is dramatic, clumsy, and needs a lot of help. Just like me! I also happen to be dating Tuxedo Mask. My boyfriend is quiet, helpful, and lurks in shadows, just like Tuxedo Mask. Art imitates life. One time we lost each other in a two-storey building and he saw me from the balcony looking for him. To get my attention, he thew a guitar pick down at my feet, like Tuxedo Mask would have thrown a rose down for Sailor Moon. 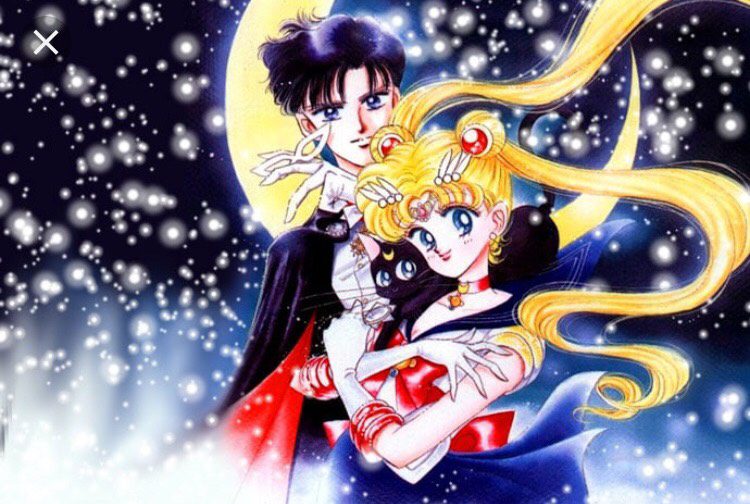 When I am performing on stage it feels like time stops:

I’ve always wanted to be a performer and I’m so grateful that I have the opportunity to do what I do. I’m one of those weirdos who does better under pressure so I know I was meant to be a performer! When I’m in front of an audience I have extra strength and agility. This is adrenaline, I guess, and it works in my favor.

When I’m doing pole or aerials, I can’t think of anything else. There could be a million things on my mind troubling me, but when I’m in the air they all vanish and I’m completely immersed in what I’m doing.

It requires intense concentration to not die, but still, it’s very peaceful. 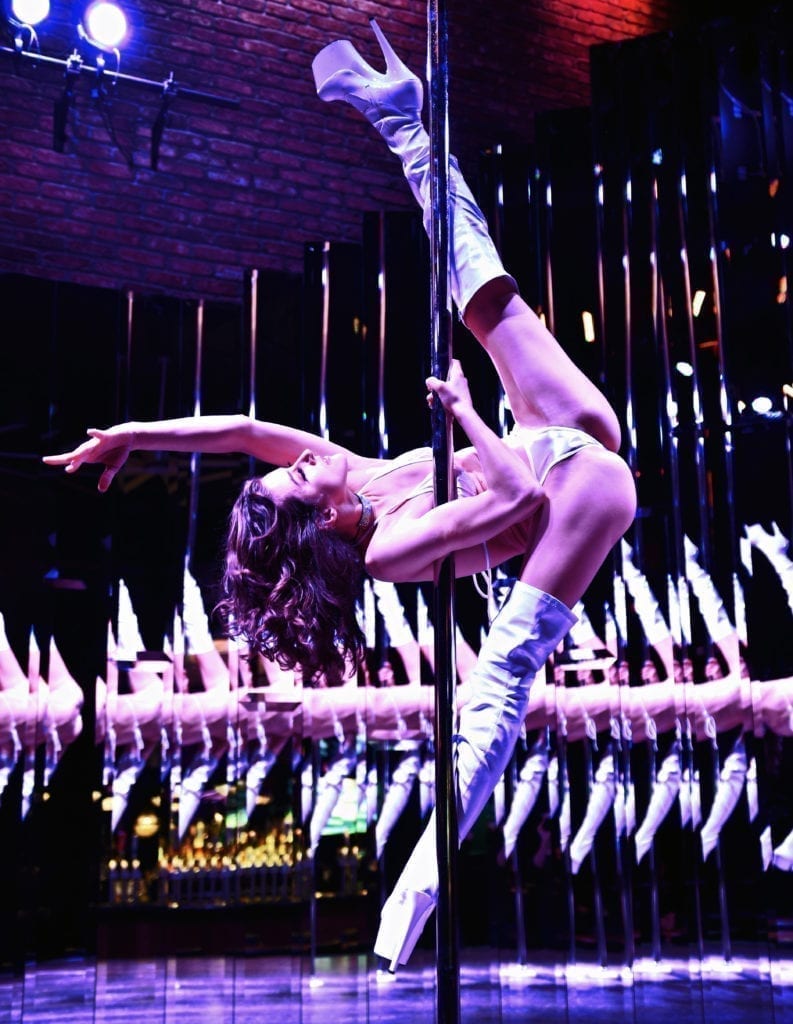 Nina Nightblossom’s spectacular feat of daring with the pole as her ally at Vancouver’s Granville Strip.

I’m still working on my confidence and have a long way to go.

Confidence feeds the aforementioned blissful feeling during a performance, so I’m quite thirsty for it. True confidence, for most, is a skill that needs to be developed. Perhaps we all had it as children, but it got beaten out of us as ego set in.

In dance and performing art, confidence is key. It can be cultivated by training enough to be able to let go of thought and feel certain in your abilities. Or by acknowledging that life is short and just giving it all you got.

In the words of Ice Cube, “You can do it, put your back into it.”

This mantra has helped me a lot… 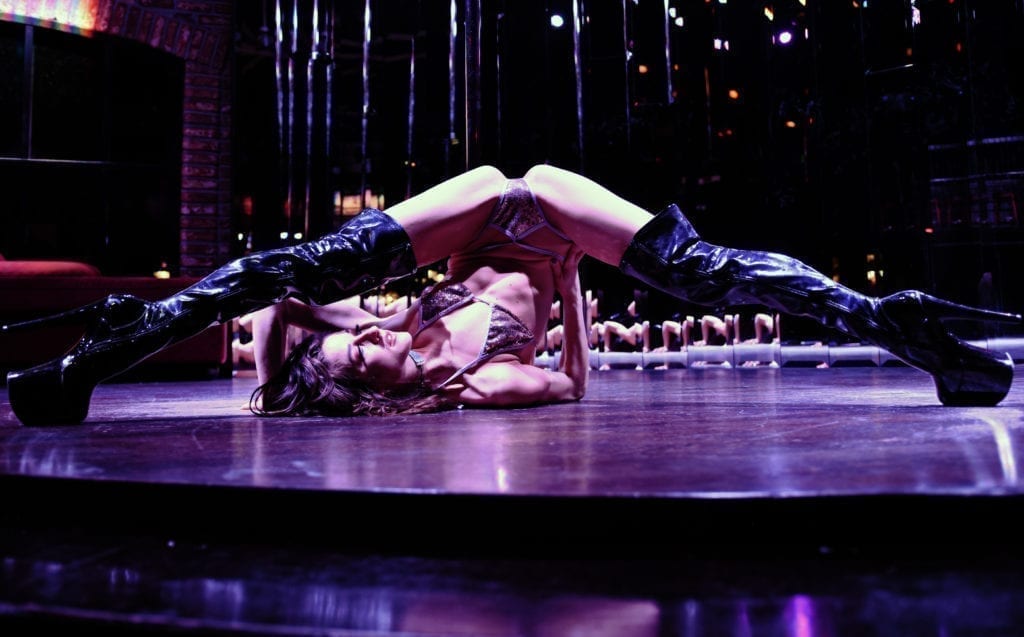 Fighting the good fight with her bionic stunts, Nina Nightblossom wows the audience at the Granville Strip.

Sometimes you have to feign confidence in order cultivate it. One can exude confidence and still be insecure.

Many performers are insecure, especially if they are always pushing themselves to improve. Confident onstage, but the insecurities creep in off stage when given the chance to think and judge themselves again.

The exotic dance community here in Vancouver, or what I know of it, seems to be thriving. Everyone is really supportive and uplifting of one another, more than I ever expected. The club I’m at is top-notch and the sense of cameradery among the dancers and bar staff is something special.

I’d like to see more than four strip clubs in the entire city. Many were closed down a while back. I wish that the stigma surrounding strip clubs would die down.

Stripping is the best job I’ve ever had and I want to share my joy more openly. 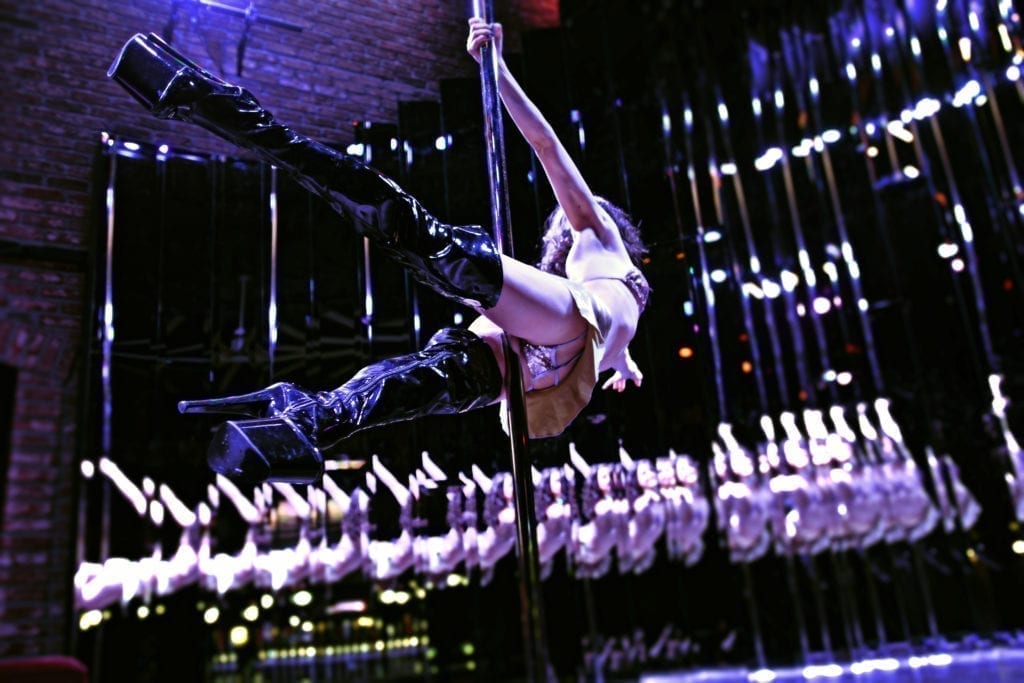 Is it a bird, is it a plane? No! It’s Nina Nightblossom, superhero stripper, flying through the night.

I set up my phone camera at the DJ booth to record all my shows. I’ve been doing this ever since I started dancing onstage last year. It’s actually for my own training purposes, so I can critique myself and work my moves out. After ten months of footage, I had a lot of screen shots that I wanted to share and thus I took to Instagram.

I have a great deal of respect and fear for the art form, which lowers my chances of having an accident. I don’t do anything risky or beyond my skillset.

Checking in with how I’m feeling, how I want to dance, I select my costume and music accordingly. Different music inspires different performances. So whilst I love dancing to something lush and romantic like Can’t Take My Eyes Off You by Franki Valli. I also love techno!

Our DJ’s help us make the magic happen, they’re our heroes too! 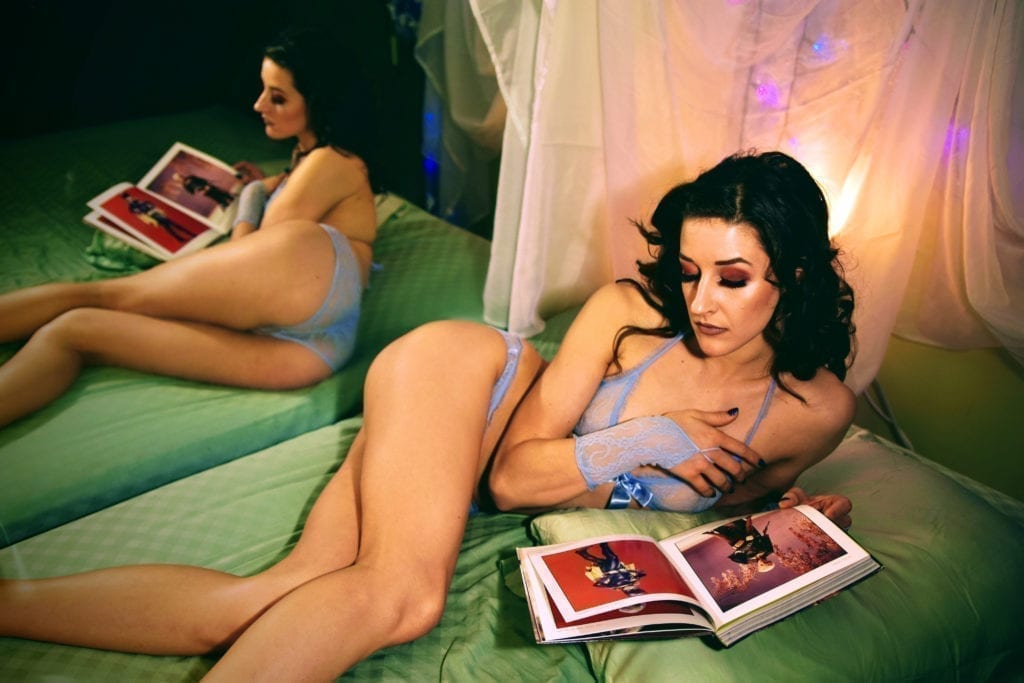 Nina Nightblossom relaxing at home with a comic book, taking a well-earned rest from flexing her superpowers.

Everything nowadays is ultra explicit. Singers are basically naked; everyone’s taking their clothes off. Showgirls have long been a thing, and strippers are modern day showgirls. Get with the times, people!

All photographs remain the copyright of Nina Nightblossom.

You’re just too good to be true, we can’t take our eyes off you…

Stilettos went on in 1997 before UK even heard of Pleasers, back when strippers were called table dancers and the internet hadn’t happened.