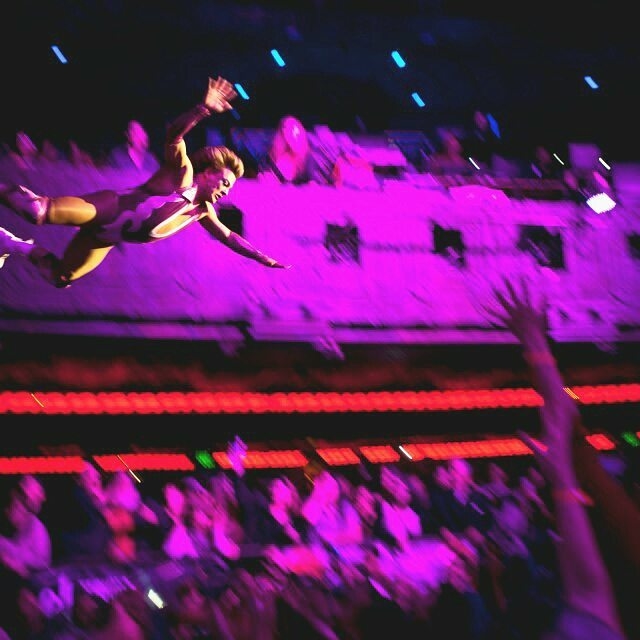 Cars pull up alongside the theatre, darkness flees in the face of neon. A door opens, polished chrome and aqua, light reflects on the polished surface. A shapely leg, clad in fur at the ankle, emerges. Another follows, and the goddess stands before her worshippers ready for the coming celebration. She owns this earth, wordless commands directed to all then strides toward the temple. The crowd holds back, dark warriors guard the Goddess’s path. She doesn’t look back. All gaze on in awe. Soon it will begin.

‘If you’ve never been here this show has everything. Sex. Violence. That’s about it really. What more do you need?’ Blaine Capatch


Lucha Vavoom is a show unlike any other. Wrestling fans might consider it a wrestling show. Others consider it a strip show, with some wrestling mixed in. The reality; a genuine mix of the two. The wrestlers and strippers are the main stars with comedians providing commentary on the matches and the striptease. Singers add to the overall blend to a lesser degree. The key thing is an emphasis on having a good time and the performers being given their opportunity to shine. Producer, Rita D’Albert’s approach to how the performers are treated is particularly refreshing.

Lucha Vavoom. The name itself evokes the exotic and promises a feast for the eyes. The reality isn’t far from that. Lucha Libre wrestlers from Mexico and the local area of California all congregate several times a year to ply their trade, Lucha style. What that means is insane acrobatics, hard hitting wrestling and a healthy dose of comedy mixed in. But that is only half of the story.

The other half, the Vavoom if you will, is a collection of some of the best exotic dancers and strippers in the country. Pole dancing mixes with striptease. Aerial strip blends with couples stripping together. The variety of strip on display here is incredible and is also informed by the theme of each show. The shows are put on every three months or so and usually run for two or three nights. There is a show for Halloween, another for Valentines and more for other seasonal holidays. The Halloween show is a particular highlight, where the weirdness can be ramped up to eleven and the performers can really have fun with the entire concept.

‘You won’t find a weirder cast get along so well. Hugs, kisses, insanity and tequila.’ Jeff Davis

The wrestling segments follow a familiar formula to fans; good guys versus bad guys with plenty of storytelling and comedic commentary during the matches. The wrestlers are accompanied to the ring by beautiful women, which helps to set the tone for the whole show. Cassandro is a prime example of the typical wrestler that Lucha Vavoom employs; a veteran wrestler, openly gay (still a very rare thing within wrestling), who describes himself as ‘the Liberace of Lucha’ and dresses accordingly. He has retired and unretired over the years but the acceptance he enjoys from the crowd is typical and not what you would expect from more mainstream approaches to wrestling.

The strip segments have an awful lot of variety, often informed by the theme of the event. For example, during a Halloween show a stripper might perform in costume as a witch, ghost or ghoul. Add in a healthy dose of variety in strip styles and you have a good mix to suit all tastes. A segment might be a pole dance, an athletic display that is both astounding in its pure athleticism and undeniably erotic in its performance. Other segments involve rollerskating or group work as well as more standard approaches to strip. In all cases, costume plays a major role and, much like the wrestling it accompanies, tells a story as the strip unfolds.

‘The dancers, I don’t actually see their numbers before the show, I help them with the costuming and the music…I have a lot of trust in people we work with. The night of the show Liz and I are completely surprised and delighted along with the audience.’ Rita D’Albert﻿

Despite being around since 2002 and touring in a few select areas, Lucha Vavoom is very much a local show with a real flavour of Los Angeles. It has a strong Latino flavour because of the Lucha Libre but also has a very camp, live life to the full approach as well.

‘It’s really representative of all the stuff that goes on in LA: low-riders, showmanship and the whole thing.’ Liz Fairbairn

Picture if you will, the interior of the Mayan Theater, filled to capacity. The wrestling ring dominates with a platform stage at the front for the use of the strippers. This is the Halloween show and a puritan stands tall on the stage. He calls for the punishment of a witch. Her crime, an attempt to sneak in her own drinks to the venue. A puritan procession makes its way through the crowd, the women among them demure, heads lowered and hands held in prayer. The witch takes her place on the stage and the puritan calls out ‘Do you want to see a witch get burnt!’ He repeats this and mocks the crowd as ‘sissies’ to prompt an increased response. The puritans fade into the background and the witch mimics being tied to a pole.

The Prodigy’s Firestarter booms and our ‘witch’ begins her pole dance. Subtle for a moment, her puritan clothing contrasts with some smaller moves for a taster of what is to come. She removes her apron, two of the female puritans shred the remaining clothes from her and reveal a white bodysuit embossed with flame with fiery makeup hidden under her hair. The pole dance proceeds, her moves both athletic and erotic and provoke a good response from the thousand strong crowd. A fantastic performance, and this is the opening act, meant as a warm up. The choice of Firestarter for music is a good one and the dance continues for the duration of the song, no mean feat for any athlete. A brief comic interlude follows and leads into the first of the wrestling matches.

The show proceeds from there, mostly following a pattern. Striptease, followed by a comedy skit, followed by wrestling. The entire feel of Lucha Vavoom is one of immense fun and a real Mardi-gra attitude. It comes across as a directed party, with elements of Rocky Horror and Elvira thrown into the mix for Halloween.

Burlesque is a good description of what Lucha Vavoom is. According to tradition, a burlesque show was a variety show containing comedy acts and singers alongside a generous helping of striptease. By updating the format for a modern audience, something fresh has been created here. Strippers in Lucha Vavoom don’t go quite as far as those working in traditional strip clubs, though. The performances are often similar but the strippers stop short of full nudity. But this in no way detracts from the show at all and means that the show can avoid any additional legal entanglements that allowing full nudity could bring. All in all it seems like immense fun and over the years since its inception has also managed to tour, mostly to cities in Southern California but also as far afield as Toronto, Amsterdam and sin city itself, Las Vegas.

One can only hope that the success of the show continues, perhaps with a broader touring schedule that will bring it to a wider audience.