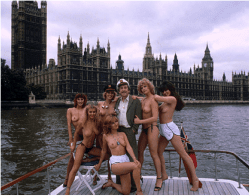 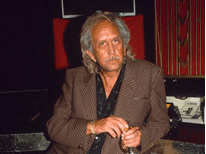 Paul Raymond , who started the boom in British strip clubs by opening “ Raymond’s Revuebar” in 1958 and died in 2008 aged 83 one of Britain’s richest men , has since his death been the subject of 2 biographies and his life is to be made into  a feature film called “ Paul Raymond’s wonderful world of Erotica” staring Steve Coogan expected to be released in 2012. I thought strip-magazine readers might be interested in an outline of his rise to fortune and how all this came about.

Paul Raymond was born Geoffry Anthony Quinn in Liverpool in November 1925, he was brought up in a strict catholic family but his father a haulage contractor left his mother for another woman in 1930.When the war broke out the family moved to Glossop with an uncle who was a Doctor and Raymond left school {where he had not been a success} to join the Manchester Ship canal as a trainee. Britain had national service in those years and after a very short spell as a Bevan Boy in the coal mines he joined the RAF as a drummer while at the same time making additional money as a self confessed spiv on the side. 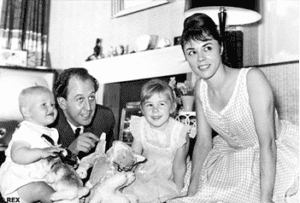 bought a mind reading act used first on Clacton Pier and later in a range on mainly northern variety theatres. He enlivened the mind reading act by introducing scantily clad dancers and later the girls went topless though in the fashion of the time they had to stand stock still once bare breasted. The topless girls were a big success and this led to Raymond developing his own reviews which often featured nudity and were used an attempt by variety theatres to combat their falling audiences.

One of the girls was Jean Bradley who Paul Raymond married in 1949 and she acted as his dancer and also started choreographing the shows. The couple’s reviews also featured Phyllis Dixey who was the most famous stripper in the UK but coming to the end of her career, plus performers like Shirley Bassey whose star was on the rise. Variety theatre was in long term decline with the advent of television plus the couple had a daughter Debbie in 1956 and also Raymond could see the potential for racier shows so this all cumulated in 1958 with him buying the lease of the old Doric Ballroom in Soho to convert into a permanent  home for his shows. MEMBERS ONLY The Life and Times of Paul Raymond 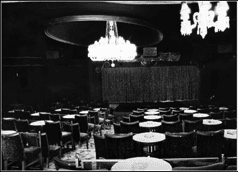 The new venue was to be called “Raymond’s Revuebar” and was to be a private members club as such not covered by the Lord Chamberlain’s rules and able to offer moving nude dancers for the first time in the UK. The club was a great success and by 1960 it had 45,000 members and was visited by many of London’s celebrities of the time like John Mills, Peter Sellers, and Stanley Baker. 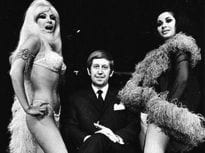 tried to restrict the acts leading to a series of what now sound ludicrous complaints. In 1961 Raymond was fined £5,000 {the price of a new Rolls Royce then !} for allowing the audience to ring the bells of the Ding Dong Bell girl ! The various complaints actually acted as good publicity and as the notoriety of the place grew so it got even busier.

theatre in 1964 but as the 60s developed a number of new competitors started to appear as laws were relaxed and Soho became the sex centre of the UK with over 30 strip shows opening and as many as 60 sex shops. The Revuebar was much plusher and more professional than any of the newcomers and retained and strengthened it’s position as a less sleazy way to watch naked women. Raymond became seen as the more acceptable face of Soho and in 1967 he was inducted into the showbiz charity organisation the Grand Order of Water Rats.

The growth of the sex industry in Soho in the late 60s early 70s owed much to corruption in the Metropolitan Police however expose’s in the newspapers and the appointment of Robert Mark as Chief Constable saw this change and in 1972 a case involving James Humphries saw several senior officers go to jail and the attempt to introduce much tighter controls. This caused something of a mini recession in Soho which depressed property values just at the time Raymond had started buying freeholds in central London particularly Soho, in 1968 he had bought the Whitehall theatre and in 1974 he added the Windmill theatre and from this time to the mid 90s he acquired the freeholds of a reputed 60 out of the 87 acres of Soho representing over 400 properties. Through all this expansion Raymond remained the only shareholder and displayed a reluctance to take in outside finance which eventually paid off big time.

The Whitehall theatre was used for a series of farces which involved nude girls starting with” Pyjama Tops” and running for many years on variations of the theme. The lead actress in these productions was normally Fiona Richmond and from 1971 Raymond started a very public affair with her leading to a divorce from his wife in 1974. At this period Raymond in his mid 40s and in contrast to his later years was very much the “playboy about town” driving a Rolls reg PR1 while Richmond had an E Type with the reg FU2 ! He also had a 48ft yacht, a flat near the Ritz, and seemed to specialise in fur coats, medallions, and suntans! Richmond wrote for his magazines and regularly took part in various stunts including riding through Soho as a naked Lady Godiva to publicise one of his shows. 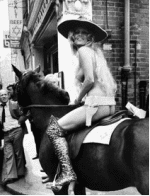 Paul Raymond had seen the potential of girlie magazines early but a first attempt called King folded after only 2 issues in 1964. In 1971 however he purchased the struggling Men Only title and proceeded to drive the circulation up to 500,000. This formed the basis of a publishing empire which eventually involved a vast range of titles including Club, Escort, Razzle, and Mayfair several of the titles being published in Europe and overseas as well. The magazines were rather like the stage shows raunchy but just within the law and though they were raided and magazines seized no prosecutions stuck.  The magazines were also considerably lessrisky than promoting stage shows, in the 70s

Paul Raymond had produced a show called the “Royalty Follies” which lost over £400k. In 1979 he launched

the “Electric Blue” series of videos which were basically an extension of his magazine into new media and also produced a couple of soft core films featuring Richmond. The revenues generated by the publishing side soon overshadowed the live shows and the combination of this and the ever expanding property portfolio saw Raymond starting to appear on the various lists of richest people in the UK {he was officially declared Britain’s Richest Man in 1992} and even making the world list of $ billionaires in Forbes magazine of the US. It emerged after his death that a bad effect of all this wealth this was that there 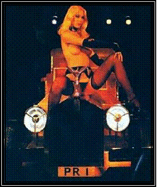 were 2 extortion attempts which were eventually foiled by the police but not until Raymond had various threats made and suffered a series of fires at his home.
The 70s and 80s must have been a very busy time for Raymond with normally 3 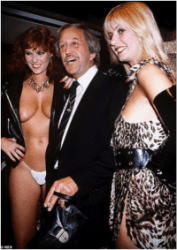 or 4 shows running simultaneously in the West End, a booming publishing business, and an ever expanding property portfolio in Soho estates. He split up amicably with Fiona Richmond in 1978 but relations remained very acrimonious with his ex wife who painted him as a shallow, unfaithful, miser.

Hecontinued to be photographed with various buxom showgirls but never had another long term commitment. Paul Raymond 2 children Debbie and Howard now started to get involved with aspects of his business, especially Debbie who became a key member of the publishing part of the empire. Debbie was definitely the apple of Paul’s eye and at one time moved into the house he shared with Richmond though she had a troubled private life including 2 marriages and drug and alcohol abuse. After trying to support her unsuccessful music career she was though groomed to take over his business as he got older. In 1992 Debbie died of a heroin overdose aged just 34.

Paul Raymond by then 67 had been a very “hands on” operator in all of his businesses but after the death of his daughter he withdrew more and more into his flat and stopped being such a feature of Soho life. He stopped getting involved in live shows and in 1994 sold the Revuebar business to Gerald Simi {though not the property}.  Stories emerged that portrayed him as something of a Howard Hughes type figure increasingly isolated from his family and friends spending more and more time alone in his flat 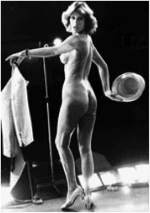 started to work against him in the 90s and beyond, this made worse by his withdrawal from active business making him unresponsive to the changing market. The live theatre shows were replaced by new table dancing clubs, the magazines by proliferating competition and later by internet porn with sales reportedly dropping by 90% over their peak, Electric Blue folded in the mid 90s just as other people like Playboy were moving into cable TV, but through all this his property empire continued to  flourish.  The Revuebar itself finally closed in 2004, ironically caused it seems by Raymond’s rapacious rent demands, though by 2011 it had reopened as the UK branch of ”The Box” a club in concept not unlike the original Revuebar.

On his death in 2008 he reportedly still left £650m apparently mainly to his granddaughters Fawn James and India Rose {Debbie’s children}though it seems stories of break ups with various members of his family were somewhat overstated. It’s emerged since that much of the will was left in various trusts and that others have benefited so that by 2011 his old property empire has been essentially split into 2 parts;  Raymond Estates operated by his son {reportedly estranged for many years} Howard and Mark Quinn his nephew who had worked for him since 1980, and Soho Estates run by John James Debbie’s ex husband. It has even been reported that Derry McCarthy Paul’s  illegitimate son from a relationship prior to his marriage who had only met his father once has also benefited from his estate.  It all rather contrasts to the newspaper image of a sad, lonely old man who had no friends and ignored his family.