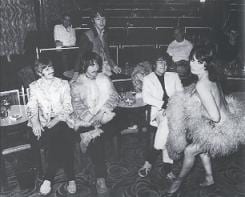 MEMBERS ONLY The Life and Times of Paul Raymond

‘What I have always done is give the public what it wants,
not what I think it should have’

Miser. Abominable showman. King Lear. For almost forty years,
Paul Raymond (1925-2008) was one of Britain’s most scandalous
celebrities. He is best known as the owner of Soho’s Raymond
Revuebar, which in its 1950s and 60s heyday was frequented by the
Beatles, Frank Sinatra, Judy Garland and the Krays. There – with
his choreographer wife – he presided over striptease shows that
pushed at the boundaries of legality and, in doing so, played a
crucial role in the arrival of the so-called ‘Permissive Society’. As a businessman he enjoyed equal
success as a theatre impresario, property magnate and later, a porn baron with a stable of top-shelf
publications and films.

‘A normal, healthy chap likes to see a pretty girl
without any clothes on.’

With his fur coat, gold jewellery, customised Rolls-Royces and
taste for showgirls, Raymond was often portrayed as the
cartoonish personification of nouveau riche vulgarity. Yet he
also embodied the entrepreneurial instincts that would
transform this Liverpool lad into Britain’s richest man—a man
so prosperous he was the victim of a terrifying extortion
scheme.

Members Only – the first
ever comprehensive
biography of Paul Raymond

– follows him from his strict Catholic
upbringing to his lonely death in 2008, by which time his isolation,
paranoia and extreme wealth had earned him a reputation as England’s
answer to Howard Hughes.

About the author
Paul Willetts is the author of two previous works of non-fiction,
including Fear and Loathing in Fitzrovia. This biography of the
bohemian writer and Soho dandy, Julian Maclaren-Ross, has just been
optioned by the producer of Prime Suspect. As well as editing four
collections of Maclaren-Ross’s work, Paul has written for the Guardian,
Independent, Spectator and TLS.

Paul Willetts is available to write features and for interview. For further information, contact
Anna-Marie Fitzgerald at anna-marie.fitzgerald@profilebooks.com or 020 7841 6304